First things first, let me just say, what happened in Las Vegas on October 1st was horrendous and genuinely my heart goes out to everyone affected by the shooting.

I’m not going to comment on the shooting, nor the ever on-going argument over gun control.

What I am going to comment on though, is articles such as this:

I’ll show you the headline and main photo: 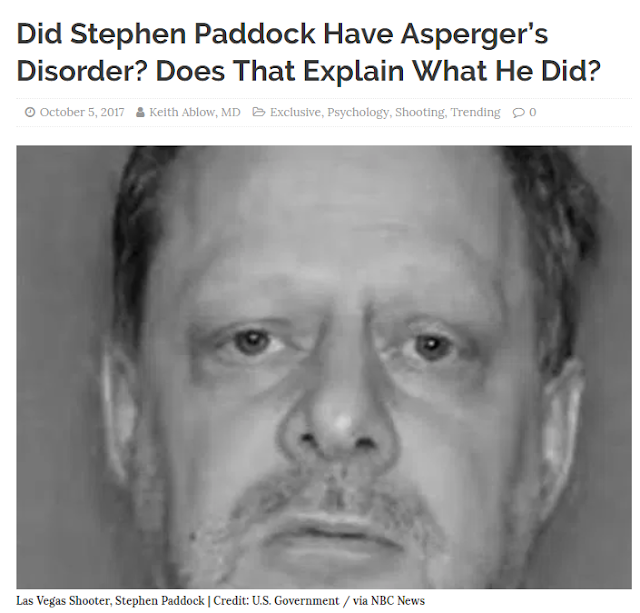 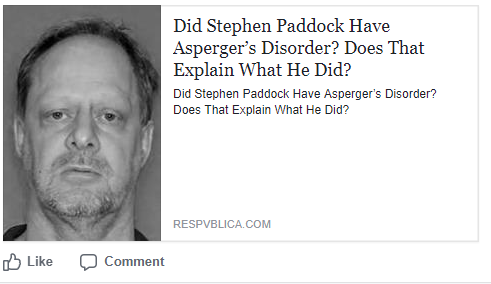 So what do we have here before we even get into the Article?  Well we have a giant Police mugshot of a mass murder with the word ‘Asperger’s’ sat right next to it…

How many negative connotations will now be derived from that…?

So, to save you the trouble of reading it and also to prevent the website getting clickbait links, I’ll summarise:

A “Professional'” person diagnoses another person he has never met, with a condition he doesn’t even know the proper name of. (He calls it Asperger’s Disorder – which is not a thing)

Keith Ablow, the Author and resident Forensic Psychiatrist has NEVER met Stephen Paddock.  All he knows of him and his life is taken from interviews and quotes, posted in news reports in print and on TV.  So any information he has on Paddock is, at best, second-hand.  So, on this basis and in his eminent wisdom (please note my sarcasm) he has deemed his skills as a Diagnostician great enough to diagnose Paddock with Asperger’s Syndrome.  Except he calls it Asperger’s Disorder…  Which isn’t a thing by the way.

Headlines and articles directly linking Autism and murder, as this one does, are dangerous and not to be trusted.

If Dr Ablow were to read my response to his article I’m sure he would rebut by saying that in the very first paragraph of his article he states that most people with Autism do no harm:

“…please note the fact that the vast, vast majority of people who suffer with autism spectrum disorders do not harm anyone.”

How lovely of him to write that…

Except, according to a Forbes Article from 2016, a study found that 59% of Social Media viewers share articles without ever having actually read them.  They don’t even go so far as opening them. Now Dr Ablow knows this.  The editors and headline writers at Respvblica know this. Anyone with a little savvy on Social Media knows this.  So they have deliberately made a contentious headline, knowing that two thirds of their audience will share this article, based on that headline.

Something else extremely problematic is that he follows that last sentence with this one:

“They are brave victims of mental illness and perpetrators of nothing.”

This makes me fear for all the Asperger’s SYNDROME people he has ‘treated’. It’s not a mental illness.  It’s a Neurological Developmental Disorder.  A mental illness is treatable and usually curable.  A Neurological Developmental Disorder is not.  But hey, what do I know? I’m not a Forensic Psychiatrist… Apparently Dr Ablow is though, and one with 25 years of experience, so the fact that he can easily confuse the two is extremely worrying…

Keith Ablow calls himself a medical ‘professional’.  Yet has made two grave errors regarding Asperger’s Syndrome, something he claims to be an expert on.  Maybe I’m putting words in his mouth but I have little doubt that Dr Ablow adheres to the belief that Autistics have no empathy, yet here he is showing zero empathy for Autistics and zero for anyone affected by Stephen Paddock’s horrific act.  He shows no empathy himself, because he’s riding a trend and a newsworthy story, knowing every click on his headline earns money from advertising on Repvblic’s website (He probably gets a percentage of that, he can correct me if I am wrong…).
Articles like this cause great HARM.  It’s difficult enough already when the News Media narrative of Autism is so negative, but to actually (and not for the first time) have Autism associated with murder is just NOT acceptable.  The subtle subtext to the current Media narrative is the Autistics are dangerous and not to be trusted.  I do not find this message acceptable because it is not true.

“This is the kind of thing that only causes harm, nothing else. I remember when a pilot caused a crash a few years ago killing all the passengers and all the media was talking about him suffering from depression, as if depression makes someone want to kill a lot of people with them. It’s wrong.”

Chuck McIntyre, an Autistic Advocate, had this to say:

“People should know that Autism alone does not give people homicidal tendencies and does not mean you do not know right from wrong. Asperger’s does not make you a Sociopath or psychopath.”

He went on to say:

A., a fellow Autistic Advocate agreed:

“It (Asperger’s) would not explain why someone would commit a crime, it isn’t that simple or ridiculous. Many autistic people suffer from repeat discrimination, rejection, persecution, bullying and do not commit crimes as a result.  This is simply another news story demonising, dehumanising, or discrediting people on the spectrum and disseminating false information.”

A. also had a message for Dr Ablow:

“Putting ‘MD’ at the end of the entire article after one’s name, does not give it some kind of stamp of authenticity, or make it untouchably, unchallengeably factually correct.”

I want it made clear that statistically there is no link between Autism/Asperger’s and murder. Autistic people are not homocidal and are not more likely to be homocidal, despite the headlines claiming otherwise.

The bigger concern for me is that every single day Allistic (non-Autistic) people commit murders and atrocities.  Why don’t they get fear-mongering headlines about the likelihood of them being not Autistic?! Maybe because it’s not as newsworthy and it certainly doesn’t fit the narrative.

Autistic people find it difficult enough to live in a Neurotypical world, without the tar of being unsafe to be around.

Everywhere I look, I see someone who has committed a crime being described as ‘being a loner’ and therefore Autistic, and before you know it there are articles by ‘professionals’ such as Dr Ablow  garnering hundreds of likes. It’s ‘diagnosis’ by association and those who have the diagnosis, or suspect themselves, are given one more barrier to manoeuvre around.

Keith Ablow has the initials MD after his name. He swore the Hippocratic Oath:

“I will follow that system of regimen which, according to my ability and judgment, I consider for the benefit of my patients, and abstain from whatever is deleterious and mischievous.”

He has sworn to do no harm.  Yet he does. And gets paid well for it.