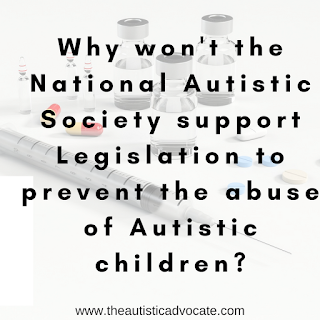 I have a quandary of immense proportions. Over the last few weeks, a battle has been ensuing on Twitter.  Not so uncommon you might think, but this battle is the peak of a war that has been waging for nearly four years.  A war with child abusers on one side, one woman on the other side and the National Autistic Society wandering around aimlessly in No-Man’s Land.

For the past four years, Emma Dalmayne, an Autistic from London, has been battling on her own against parents of Autistic children who use the touted ‘Autism Cure’: Miracle Mineral Solution, on their children.  Not just this, other ‘cures’ too such as Chelation, turpentine, biochemicals, diets, homeopathy and other fads.

Here is her petition, signed by, at the time of writing, just short of 60,000 people:

I don’t believe this statements come with any significant controversy attached.

The thought that Autism needs a cure is fed into by the negative narrative that i constantly waffle on about.

For far too long a time now, since forever in fact, Autism has been viewed upon as BAD.

Labels like SEVERE are applied, when Autistics have co-morbids.

People are told that they ‘HAVE’ or Autism or are ‘WITH’ it, in order to separate it from the person.

It’s become socially acceptable to get sympathy for regularly dragging your child around on their back, by their hood, because they “Refused to move”:

It’s fine for a ‘celebrity’ to go on national television and talk negatively about their child, while they’re standing there, blaming Autism BEFORE the kid has a diagnosis (don’t get me wrong, I’m all for self-diagnosed people because I understand the barriers to getting diagnosis – but I don’t think a six year old can self diagnose…):

Autism is seen as PROBLEM BEHAVIOUR, there are MELTDOWNS, VIOLENT MELTDOWNS.  So that makes it OK to film your child at their most vulnerable and give it to a National Newspaper to put in front of millions of people.

If you’re diagnosed Aspergic you are a Maths genius who has no ability to empathise.

If you’re diagnosed Autistic you rock and dribble in the corner.

We’re stupid, we’re retarded, we do something called ‘Autistic Screaming’

We should never be allowed to procreate.

We should be trained out of our behaviours because they’re offensive to the general populace.

The issue is, that if Autism is seen as a positive thing, that different is OK, much of the need for the National Autistic Society, in it’s current form, is taken away.

They need people to think negatively about Autism in order to generate money.  Bad news conditions are cash cows if you milk them correctly and the NAS has been milking Autism for a very long time, since the 1960’s more specifically, as the original creators of the jigsaw piece emblem.

So the NAS and their view of Autism brings me swinging back round to cures.

Emma, who runs the awesome Autistic Support and Advocacy group: Autistic Inclusive Meets, has been campaigning all this time for legislation against Autistic cures.  She, along with others, has spent this time infiltrating MMS and other cure groups and seeking evidence of parents abusing their children by using these products – products which do nothing, absolutely nothing but harm children.

Obviously there is legislation in place which covers child abuse, but the legislation Emma has been pushing for is much like the Legal High Law which came in in 2016:  To make it illegal to manufacture, produce, promote or sell Autistic Cures.  If the end users are covered by abuse laws, then cutting off the suppliers and producers is going to prevent them from purchasing it in the first place, or at the very least drives it underground where it is much harder to find.

The question is why?  Personally I think it comes back to the negative narrative.  If you say, wholeheartedly, that Autism is incurable and that no medical treatment will impact on Autism, then you have to change the way you think about it.  We’ve been down the route of throwing Autistic people into institutions, so the only possible option is to look at Autism and say, well, there’s nothing we can do to fix it, so we have to start working on the positives (Doesn’t sell very well to potential donaters though, does it?)

A couple of weeks ago Emma had a huge article on MMS in the Mirror/Sunday People, followed up several days later by a second huge article and success story needless to say, she saw this as an opportunity.  It would be useful if the National Autistic Society would change their stance and support legislation, so Emma and I went on a Twitter campaign, haranguing and harassing them, calling them out publicly.  Others soon joined and the pressure began to build, the Mirror got in touch with the NAS and asked for a statement, their position remained the same.  We carried on pushing on Twitter and started individually tagging their Directors.

Then, out of the blue, what had been a tiny paragraph on a vaguely visible webpage became a massive full page statement.  Their position remained the same, but the NAS had reacted, big-style.  To her credit, Jane Harris, who I have engaged in heated Twitter debates with previously, contacted Emma and asked for a meeting.  This was unprecedented.  Emma has had meetings with the NAS before, they even had a letter of support, which actually supported absolutely nothing: 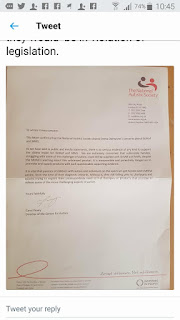 The meeting occurred only after Emma spent an age haranguing them and never with anywhere near a satisfactory conclusion.

I offered to go with Emma to support her, not because i think she’s incapable but because I thought it not fair that she has to face these people alone.  People who have dismissed and ignored her. Sara Jane Harvey, Autistic Advocate at Agony Autie, had wanted to come too but it was unable to because of the short notice for her support needs.

Emma has been working closely with Barry Sheerman, Labour MP for Huddersfield, who happens to be the chairman of the Westminster Commission on Autism.  Barry is a firm believer in Legislation against Autism cures and actioned a report several months ago to investigate and gauge the need for it. This report is due out this week and early indications are that it will be positive in terms of backing Legislation.  The National Autistic Society sit on the Autism Commission so, hopefully, they will see the sense that not coming out in favour of Legislation as a separate organisation but as an organisation attached to this decision, is going to make them look ridiculous.

It shouldn’t have to come to this.

So this is the quandary I mentioned way back at the start of this.  Tomorrow, on Friday 15th February 2018 (at the time of writing), Emma and I, armed with a letters of support from Professor Simon Baron-Cohen, Director of ARC Cambridge. 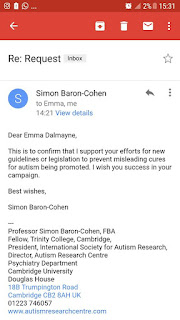 And one from the ever supportive and wonderful, Steve Silberman, author of the award winning Neurotribes, a book defined generally by the Autistic Community as the definitive history of Autism: 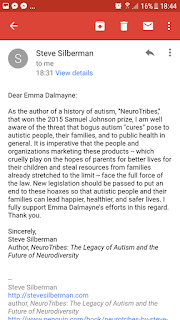 And The Autistic Taskforce, led by Dr Damian Milton: 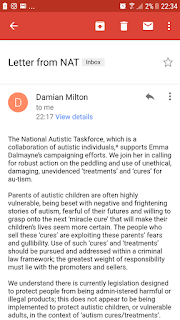 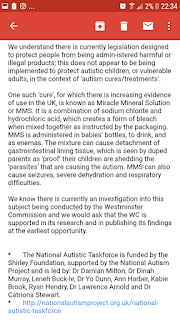 And supported in the meeting by the former Director of Research for the National Autistic Society, Richard Mills

All in the knowledge that they support this negative narrative and, especially so this week in the wake of the horrific revelation of abuse of Autistic Adults at the National Autistic Society owned and run, Mendip House , where again Autistic Advocates had to pressure them to release a statement on their main Twitter and Facebook feed.

They had created created a new Twitter account on the 8th February, the same day the Somerset Safeguarding Adults Board (SSAB), released a damning report and recommendations.  The Twitter account had no followers at the time, as opposed to their main account which has 135,000 followers and they used that account to respond to people calling them out – very blatantly an attempt to damage control and limit the exposure to the fact that NAS staff members were physically, emotionally and financially abusing vulnerable Autistic people in their care and that they had been aware of it since 2012.

It is difficult to imagine how it will feel to look upon the faces of the people who claim to represent our views. In light of all that has happened in the last fortnight, on top of everything else they have done.  The Autistic community in general, specifically the Advocacy community has no faith in the National Autistic Society, yet we are forced to work with or through them.  Why is that?

The National Autistic Society laud that in their last consultation they amassed the views of over 1000 Autistics, which works out to 0.14% of the Autistic community of Britain (I have more twitter followers than that).  Who feed off of a negative narrative in order to make money.  Who tell their donaters to “raise money for Autism”, when in actual fact they aren’t, they are raising money for the National Autistic Society.

We have no idea what they’re going to say.  We have an idea that they’ll decide to support Legislation but make it all seem like their idea, which is not unheard of.  They’ll take over the campaign Emma has been running by herself and make it all about themselves and how wonderful they are.

To a degree, that doesn’t matter – the important thing is that Legislation is passed, but the principle is not right.  Emma has fought her way through this.  Yes, she’s had loose support, but to get this campaign in front of the people she has, is testament to her tenacity, dogged determination and utter love for the children she wants to protect.

I’ve come to this late and I have no interest in my name being attached to this campaign, I support it because it is right and because Emma is my friend.  But Emma has earned having her name go down in history as a champion of Autistics, as someone who fought and prevailed, as someone who saved lives.

With the support of so many Advocates and people from the world of Autism, how can she fail?

And, more importantly, how can the National Autistic Society stand in her way?

There are Advocates doing different things all over the world, working on different projects and campaigns at different levels, all equally important.

Whatever you do, however you do it, be Autistic and be proud.