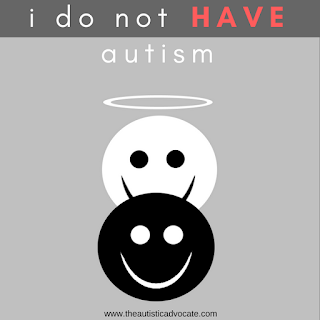 “Language shapes the way people perceive us and treat us.  It translates into actions”

– Daniel Marner, Autistic and Advocate
I had a conversation/heated debate/argument today, with somebody about a bumper sticker.  (I can hear my wife groaning in the background about getting embroiled in Social Media arguments)
The bumper sticker read:

” I love someone with Autism”

But, how sweet! Right?

No, not really and let me tell you why.

Now i can sense the next ‘but’ formulating in your brain:

I’m being arsey and pedantic right?  It’s just a badly formed sentence that means that the owner of the bumper sticker loves someone who has Autism.

You can’t HAVE Autism.  Nobody HAS Autism.

Autism isn’t a detachable part of you.

Autism isn’t something you pick up along the way.

Autism isn’t something you catch (Hear the anti-vaxxers screaming in horror).

Autism is not something that needs to be repaired.

There is a prevalence of thought among parents who are discovering Autism for the first time that there are two parts to their child.  This prevalence comes not only from ignorance, but also partly from deliberate, head-in-the-sand, blindness to the truth, partly from misleading clinical terms used by professionals all over the world and partly from the Autism Speak’s style, warrior parents who take on Autism for themselves and think that doing best for their child is treating and curing them.

Let’s introduce Sophie. Sophie is Autistic. Sophie’s parents see her displaying Autistic traits and melting down because of sensory overload.  They don’t understand Sophie, nor do they understand her behaviour.  It scares them because it doesn’t fit into their idea of how a child should act and behave.  Due to this, their minds can’t correlate what is going on so they reach this conclusion: There is Sophie and all her lovely personality, then there is AUTISM SOPHIE and AUTISM SOPHIE makes up all the BAD PARTS.

It can be incredibly alarming when you hear how some parents describe their children as two separate people and that they don’t like Autistic Sophie. 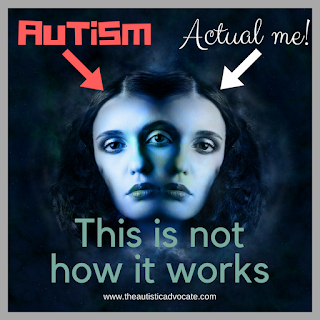 The point is that there is no AUTISM SOPHIE and Sophie.  There is only Sophie.

The Autistic brain acts differently to the Neurotypical one:

It makes us look at the world differently.  I mean literally, Autistic sensory perception and visual acuity is markedly different to the way a Neurotypical brain perceives vision.

It reacts to things differently, different signals are sent from our sensory receptors to our brains, than those with a Neurotypical brain.  Which is why we have such strong sensory reactions and sensory overload.

At this point the usual argument thrown back is:

Yes they are.  But at a fundamental level, Neurotypical brains are all basically the same as each other, you have different personalities but ultimately, they’re pretty much identical.

Separately, on a fundamental level, Autistic brains are all basically the same as each other, again with different personalities.  But, put a Neurotypical brain next to an Autistic brain and they are not the same.  Similar, but not the same.

If it’s still not clear to you, Michelle Sutton, on her website www.michellesuttonwrites.com, has an article called: “what is neurodiversity” filled with basic infographics and it can be found here.

If you ask the latter group why, they probably won’t be able to tell you.  And that’s the problem, most of them are ingrained in the language of their parents and of the professionals. They are caught up in this ideology that Autism is wrong, that they are wrong and they are something that either needs to be fixed or that they should strive to make it so that their Autistic self is hidden away from view.

There is a culture of negativity around the use of  ‘I have’, or ‘with’ when it comes to medical terms, I have cancer, I know someone with HIV, I know someone with this disease or that disease.  You do, on the other hand, have people say “I am Deaf”, “I am Paraplegic” and do you know why, because they advocated to be called that, they fought against clinical terminology and common language.

We fight an ever ongoing battle, because with every child and adult that is diagnosed, the prevailing voice is that of the Professional, the fellow parent and not of the Autistic.

Parents don’t want their children to be defined by Autism and that would be understandable if they were suffering from a horrendous disease, but they aren’t suffering from anything.  Autism is how they see the world and interact with it.  Autism is their world.  That can never be changed, for doing so would be to physically change them, to remove chunks of them.  Then they’d no longer be Sophie.  Sophie can’t helped but be defined by Autism, because she is Autistic.  She’s still Sophie though.

I truly understand that different is scary for you.  It’s just ironic when we’re the ones who are supposed to react badly to change.

There is a name for all of this.  The current usage, ‘I love someone with Autism’, is called Person First Language. Autistic people are advocating for Identity First Language, so ‘I am Autistic’, ‘He/she is Autistic’.

I know it’s hard to hear that you’re doing something wrong and i understand that you do everything with love and good intention, but you’re also suffering from the same binary thinking that we are constantly accused of, that if you perceive yourself as right, everyone else must be wrong.

We all strive to give our children our best and want only the best for them but, in order for them to be their best, they need to know who they are. They need to know that there is a huge, amazing history behind them and so much to be learnt from Autistic culture that is filled with people to be inspired by, to want to emulate and that by denying them that you are just creating another generation of hurt, damaged and lost souls.

Please have the presence of mind to respect our wishes, to not take this personally and most of all, to not let Sophie live her life thinking there is something wrong with her, because there isn’t.  She’s simply different and different is good, different is what drives and forces us to adapt and change our futures for the better.

At the end of the day, what we are called and how we are termed, might not matter to you. You might not care.  If that’s the case it costs you nothing to change the shape of your language, to be mindful of how we wish to be perceived.
If you still hold the view that Autism is something to be separated from your child or loved one, that they are not defined by their brain function please go and read my articles on “Autism… What exactly is it?”, “Autism… What exactly isn’t it?”, “How to be a good ally” and “Functioning Labels”

Don’t take my word for it, take it from these great Autistic Advocates instead:

And finally, the wonderful Lydia Brown, with “The Significance of Semantics: Person-First Language: Why It Matters.”
(This article, from the Autistic Self Advocacy Network, originally appeared on Lydia’s website, Autistic Hoya)
« Previous Post The advent of the Autzi Next Post » If you Light it up Blue for Autism, you’re supporting Autism Speaks and Autism Speaks doesn’t support Autism…