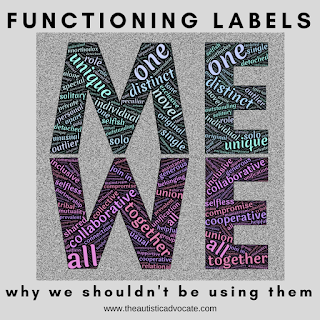 Firstly i’d like to point out this article is not about labelling people.

I’m Autistic, that’s my label, I love labels, i genuinely feel they are signifiers of our identities.  A Functioning label is something different though.

The terms High and Low Functioning are born out of the Spectrum itself, they are the division that gives it reason to exist.  Due to the wide range of traits among Autistic people, a theory was put forward that Autism was a linear spectrum, with the most able at one end and least able at the other (with ability linked to Intelligence Quotient):

The problem with this linear view of Autism is that it does not accurately represent Autism and Autistic people, not to mention that to divide a group like this, is within itself hierarchical, divisive and Ableist, which is why many Autistic people feel that the infinity symbol is a better representation of it: 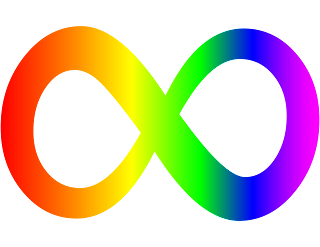 For a time now the Autistic community has been advocating the removal of the term ‘Functioning Labels’ and of Functioning labels themselves.

Functioning Labels are simply wrong.  Wrong in usage and wrong in application.

There are many people that I am aware of that have been deemed low functioning, that are far more skilled in things than i could ever be and who are not as socially crippled as i am.  Yet i am ‘High Functioning’.  I have massive hidden sensory issues which cripple me, yet a Low Functioning person may not.

Things like intelligence are measured in diagnosis of Autism.  Poor communication skills, or lack thereof are used as a signifier to Low Functioning Autism.  Yet the nature of intelligence within autism is pointed to by every single non-verbal autistic who ever learnt to eventually communicate.  Typically those communication skills are technically far more difficult to develop and apply, yet a Low Functioning Autistic is such, because at the time of diagnosis they cannot speak, or speak late or poorly.  No amount of adding layers of intellectual difference, lack of eye contact, poor self-care, or behavioural problems can mask the fact that in order to communicate to the level they do, they are far from unintelligent. Perhaps, just like I would argue that Autistic people are different and not wrong, that those deemed as Low Functioning, are not less intelligent, just differently intelligent and again, not wrong.

Do you get where I’m going?

Intelligence is no measure of a person.

Another problem this divide has bred, is the advent of the Aspie Supremacist, also known as the Autie Supremacist, or my personal favourite, coined by yours truly, the Autzi.  Who are basically Autistics, who think they are better than other Autistics, because, you know, IQ.  You can read more about them in my article here.

So, basically, a piece of terminology designed to separate the clever from the stupid*, has created a bunch of people that think they’re better because they think they’re smarter… Like we didn’t already have enough problems…

Thanks Terminology Dudes, you really done fucked up this time…

Ooh speaking of which, i have a question, which i really don’t know the answer to.  Why do ‘Professional’ People, desperately cling onto their clinical terminology and labels?

I mean, such a fuss is always kicked up when Autistic people insist on Identity First Language.  But why?  I often think they are so possessive simply because they don’t want us to be in control.  They’re literally like little children clutching onto their toys in a sand pit, terrified of someone else grabbing them.

My last comment on Functioning Labels is that basically, the Autistic Community advocates that they not be used.  High Functioning, Low Functioning, Aspergic, it matters not.  We are Autistic.  We have different strengths and weakness and should not be divided into clans to suit Neurotypical distinctive needs.
We are Autistic. We are all different, yet we are one.
« Previous Post So… Autism, what exactly isn’t it? Next Post » The advent of the Autzi