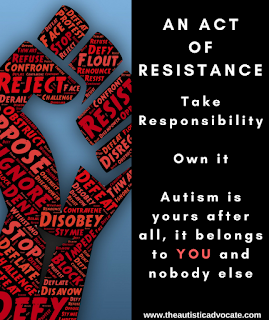 Not everyone has the ability to be able to write with any kind of regularity and one of my biggest aims with #TakeTheMaskOff was to be able to help generate conversation around Masking and give a platform to other people.

Carl Cameron is a Mentor, who has a career behind him delivering courses on Autism, he’s also very late diagnosed and will be the first to tell you the irony in being the last to recognise Autism in himself.

I have the privilege of a platform and Carl wants to talk about taking off the Mask and how it is An Act of Resistance.

These are his words, his thoughts and feelings.

Masking one’s autism is a deeply personal and complex matter, to mask is to lie, to reveal your autism, warts and all leaves you vulnerable, exposed and open, perhaps to exploitation.

We all live on the same planet, there has to be give and take, being different, being autistic doesn’t give you a ‘get out of jail card,’ a licence to behave in anyway you want too. A diagnosis of autism is an explanation, not an excuse. When you travel to another country the rules change, the language changes, the culture changes. Being autistic is like visiting another country, you have to respect the culture, the etiquette. But the question remains how do you play the game and yet remain true to yourself, your nature, your way of being.

To mask is to lie, and autistic people on the whole don’t want to lie, it feels wrong and uncomfortable.

When I am obliged to engage socially, the anxiety levels begin to rise days or weeks in advance. I find it almost impossible for the date or time of these proposed interactions to stick in my mind, it is almost as if my brain rejects them, and I am good with dates.
I start the scripting process in the hours leading up to the event. The dilemma being:

Just how much to disclose?

How much detail do they want to hear?
When is a good time to shut the hell up?
In the old days when someone asked me how I was, I told them. Now I know they, the other person, doesn’t really want to know, it’s just a greeting, just like saying hello. It took me a long time to work that out and it was only when I saw a stand up comedian talking about the very same thing, did ‘the penny’ finally drop. Inside me, when someone asks how I am, I am bursting to tell them, but now I know that it’s not the done thing. So right from the very first moment I meet someone, no matter how well I know them the masking, analysing and self coaching begins.
When forced to visit or be ‘visited’ by other people, I used to be constantly told: ‘just be yourself’ and, somewhat less charitably: ‘You don’t have to be a weirdo” or “You don’t need to tell everyone exactly what you think all the time”
Really?
Just be myself, really?
Are you sure?
If I was to be myself I wouldn’t visit or interact with anyone in the first place, I just wouldn’t go.
You want me to be myself? You really want me to talk at my natural volume and talk about topics and things which interest me, are you sure?
You want me to be myself, to call people out when I know they are lying or being sexist, or racist or in some other way inappropriate?
Really, you want me to be myself, you are happy for me to say exactly what I think without lying about it, really, are you sure..?
They don’t mean it, what they mean is: “We want you pretend to be someone else, we don’t like you the way you really are”
Ultimately when I mask (and I do so far less these days) I am denying myself and my true nature. Autism is exhausting because of this, the mental and sometimes physical effort (The mind has an impact on the body of course – all those tight chests) Nothing is instinctive, everything is considered at an intellectual level and analysed before, during and after the event in detail, for hours, days and weeks.
I said before that I don’t need to mask as much as I used too, this is true, but then there is a reason for this.
I don’t have any friends and I don’t leave the house unless I am going to work, and it is because of my work that, other than speaking to my lovely and rather patient wife that I rarely talk to anyone who is not either autistic or a genuine ally; and even speaking to allies is a quite recent thing.
I am a specialist university mentor employed by the National Autistic Society.

The only people I talk to in the wonderful University of Hull are my students, who are of course autistic.

I work for a project in the City of Hull called Matthews Hub, Mentoring and supporting autistic people into employment.

I have found this to be demonstrably the true.

There is a 30 year age gap between myself and my students and the majority of autistic people I come into contact with, but it does not matter a jot.
The meeting of people who are the same, members of the same tribe, the same people, with the same cognitive style surpasses it. Being with other autistic people is easy, it’s stress free, blissful, it is pure freedom.
Freedom to be who we want to be, to talk how we want to talk and about whatever we want to talk about.
Freedom to be who we truly are.
We take off our masks and throw them away, we have no need for them. There is mutual respect for each others differences.
Other than autism, which is my life, passion, interest and profession, I am a fan of that post punk gem The Fall.
I have seen The Fall over a 100 times, I have over 150 pieces of vinyl (mostly LPs and 12 inch singles) over 300 live recording of entire gigs. Then there are the books, CDs and DVD collection.
I like the Fall and surprise, surprise, I know a little about them (try me out!).  I also like astronomy, I have been an astronomer for almost 50 years, if you want to discuss the Messier catalogue then I am your man.

Not every autistic person has the same passions that I do, and I might not have a thing for electricity pylons, the history of the Spanish Civil War or a detailed knowledge of Norwegian Railways, but what I can do, what we as autistic people can do, is to respect how important to us those interests are, why talking about them is important, how important the drive to pursue them is. To deny them to a cruel thing to do to autistic people.

If we need a data dump, we need a data dump.
You see masking is a one sided activity. It’s all about us making adjustments for others. We have to play the game, if life is a game.  The thing about games though is generally you need two teams to play them, by the same set of rules, fairly.

Masking is not fair, we make all the adjustments, we are expected to understand Neurotypical culture without any effort or energy being made by the predominant Neurotype to understand ours, or to understand the damage that we do to ourselves for their benefit, by doing so.

When we mask not only do we deny and damage ourselves, we also reinforce the behaviour, attitudes and culture of the predominant Neurotype.

We permit their expectations and support our own discrimination.

By throwing off the mask, not only are we taking back control of our lives and allowing ourselves to truly be the people we really are, we also making a political statement, it’s an act of resistance.

An act of resistance…

I talk a great deal about how Autistic people are in a civil rights movement.

Carl makes a really good point, that Masking, although a form of self-protection, aside from the emotional and physical harm it does it, despite how much Masking plays into our early death rate, our suicide rate, our heart attack rate, despite how it causes us to Burnout which in turn can lead to depression, but it also holds us back and harms us as a people.

Masking DOES reinforce the behaviour, attitudes and culture of the predominant Neurotype – the not Autistic.

It plays into the hands of those who wish to normalise us, it encourages them, because they do not understand Masking and see it as a good thing, that it’s good to be ‘Normal’.

There is huge privilege in being able to even write this, because so many Autistic people are not safe in removing their Masks, to truly allow themselves to be themselves.

Not Masking draws attention to our differences, but at what point do we have to draw the line and say enough?  That we are no longer doing this because it is killing us. That YOU, the predominant Neurotype are killing us.

Right now AIMS-2, a European initiative spearheaded by Autism Speaks, funded by Pharmaceutical Companies is sinking hundreds of millions into seeking a cure, ‘medical treatments’, a way to eradicate us.

Right now, across the world, Behavioural Therapies are the ‘in-thing’, training Autistic children to not be Autistic.

Right now, Autistic children are being forced through school systems that cause distress and overload, with the aim being to give us a qualification that allows us access to a workplace which does not want us and actively excludes us.

Right now, Autistic children are being given electric shocks or swaddled in wet blankets ‘to calm us’.

Right now Autistic children are being locked away, like some relative in Victorian times locked in an attic.

Right now Autistic people with greater support needs and learning difficulties are being beaten and abused in Care Homes.

Right now parents are being encouraged to seek diagnosis for their children by tantalising awareness campaigns that drip feed a tiny further grain of truth about Autism and then are being accused of FII (Munchhausen’s by Proxy) because the Diagnostic services aren’t given the proper training and diagnostic criteria isn’t good enough.

Much of these things are out of the hands of most Autistic people, but there is one thing that is in the hands of nearly all of us:

We Mask to keep ourselves safe and to make non-Autistic people feel comfortable.

So, stop making them feel comfortable.

Show them what it is to be Autistic, literally flap it in their faces and be proud of it.

If you can do it safely, do it as well as you can.

If you can’t do it safely, talk about it where it is safe to do so, join the chorus of people saying “No more!”

It should not have to be this way, but history shows us that it seems to be the only way.

Those of you with the privilege to take your Mask off to any degree:

I call on you now to do so.

Be honest about how the world makes life hard, how Autism can make life hard.

Autism is yours after all, it belongs to YOU and nobody else.

« Previous Post Masking: I am not OK Next Post » An open letter to employers of Autistic people