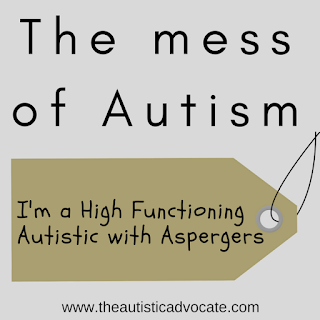 The only Clinical difference between Autism and Asperger’s is speech delay around speech milestones and that does not necessarily mean Mutism or Selective Mutism, it could literally mean delayed part speech.

The two are inseparable past that point, because essentially they are the same thing.  There is no identifiable difference between an Adult diagnosed as Asperger’s and an adult with a diagnosis of High Functioning Autism.

There are Myths around Asperger’s that stem not only from the original decisions enforced on Hans Asperger.  On several occasions he had to choose to separate the intelligent from the not-so, as that was his remit from the Nazi Government who funded and directed him.
The Nazis wanted super smart children to the future leaders of The Third Reich, so Asperger found them. The other children under his care showed the same traits and shared all the basic similarities, they just weren’t as smart, or some of them were mute.  Therefore the “Little Professors” were identified. To a degree, it is arguable, that Asperger made the best of a bad job and chose to save who he could.

Hitler’s sister’s Fiancée, Erwin Jekelius, ran a special hospital, Am Spiegelgrund Children’s Clinic.  The remainder of the children were sent there.  When the Allies liberated the Hospital at the end of the war, all that remained of them were lots of brains, in jars.

Steve Silberman’s brilliant book Neurotribes goes into more detail about this and over whether Asperger was a supporter of the Nazis and knew what would happen to the children he sent to Am Spiegelgrund.  Silberman argues that he wasn’t, though John Donvan and Caren Zucker have since released In a Different Key, with shocking newly found evidence argues strongly that not only did Asperger knew he was sending children to die, he was a willing participant.

The point here is that Asperger, among others who were making similar realisations around the world at the same time, found that the children under his care ranged wildly in their day to day abilities depending on the situations they found themselves in. It is only when people like Leo Kanner, with his narrowly defined range of what made up an Autistic person came to more public knowledge and then those findings in turn (already working on a false premise), were built upon, were the ideas of a spectrum and Functioning labels born.

The High and Low functioning labels were intended to separate out Autistics with an IQ under 70 and  according to practice, should still be used by Professionals to designate exactly that. Now though, societally, functioning labels are used by people and Professionals to designate the person’s ability to function in society.
It’s rubbish.
All Autistic people are individuals of course.
We are all different and each of us functions differently on a daily basis, depending on our unique situations and our co-morbid conditions.

Autism is Autism, it’s the same for every Autistic person.  There are no degrees of Autism, one person is not more or less severe than another. Certain people are able to have better support structures and coping strategies than others, the underlying Autism is the same. It just affects different people differently, often with a co-morbid condition exacerbating the problem. A learning difficulty will often get someone a diagnosis of Low-Function Autism, when in fact, they aren’t a Low Functioning Autistic.  They are an Autistic who happens to have a Learning Disability.

Do you see the subtle difference there?

It may not seem much of one to you, but to the Autistic community it is a massive difference.  There is a narrative about Autism which is distinctly negative.  Using ineffective labels that effectively blame Autism for some sort of deemed deficit, just perpetuate that negative narrative.

The biggest factor of the removal of Asperger’s Syndrome from the DSM 5 and drawing ‘the Spectrum’ under the one label of ASD,was the pressure from the Autistic community. A significant proportion of us see the separate labels and functioning labels as divisive and harmful.

I was at a conference recently where an Autistic man, diagnosed a year ago, introduced himself as High Functioning.  He then went on to tell his life story which was the typical tale of depression, isolation, career going well until changes, suicide attempts, burnout etc.

I spoke next and I asked why, after all that, he considered himself High Functioning, when clearly he hadn’t been functioning in society at all.

He said “That’s what I was diagnosed as”

There is a clear lack of understanding of what Autism is and how society harms us as Autistic people.

The vagueness of all this and the misunderstanding and mythos around it, just serves to confuse Neurotypicals as well as pre and newly diagnosed people. It just puts a barrier up between all of those groups and already established Autistics.
There are no separate High Function and low functioning people.  Aspergers and Autism are indistinguishable from each other, so are the same.  There is no mild Autism, or severe Autism, only Autism and the ability of the individual to prevent societal norms from crippling them.

It’s often argued that a separation of levels helps Professionals identify the support needs of an individual, which is really a fallacy, a technicality at best.  Any patient should be identified by their individual descriptors, a thousand Autistic people in one room would have a thousand different needs, a level of Autism isn’t going to help anyone in that situation.

People complain Autistic people are hung up on labels when actually we aren’t, we just want them gone.  It is the Non-Autistics, the Professionals, the pre and newly diagnosed who are the ones clinging onto the labels and obfuscating things.

***An edited version of this article can be found at www.autismawareness.com under the title ‘The mess of Autism‘***

« Previous Post I look back at my Parents and wonder: how did they miss me? Next Post » An Autistic Education

1 Response to "The mess of Autism"