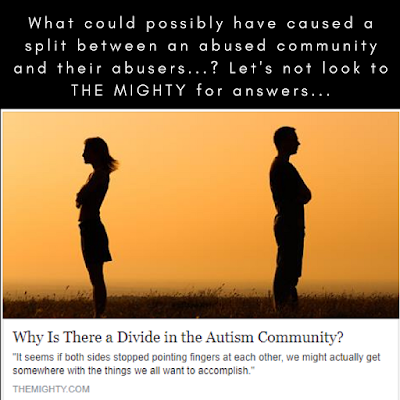 The Mighty posted this article yesterday, which is interesting as it is one in a line of many negative and damaging blogs that they’ve put out since teaming up with our old friends, Autism Speaks.

Skimming through their specialist Autism section, there is a lot of Autism Speaks rhetoric so it shouldn’t be surprising that an article like this one pops up.  But, this one seemed particularly threatening and a perfect example of a common theme Autistics are running into all over, Stockholm Syndrome.

First up, The Mighty, which really is an awful website.  It’s closely connected to Huffington Post, so you can probably tell the level of reporting and journalism that goes already.

Eve Reiland over at American Badass Activists has had run ins with them, as is show in her article called ‘My Communications with the Mighty.com’

Kirsten Schulz, who blogs over The Medium, actually has a growing tribute to The Mighty with two blogs (and possibly more to come), the first entitled ‘An Open Letter to The Mighty on Their Continued Support of The Hate Group Autism Speaks’ and the second called ‘The Mighty & Autism Speaks, Part Deux’

So, on to the Article itself, I won’t bother linking it, I’d rather not give them clicks from my site:

The article talks about a divide between Autistics and parents of Autistic children.

It waffles on about opposing viewpoints between the two and then ends with a rallying call that everyone cuddle and be friends and breed unicorns together. 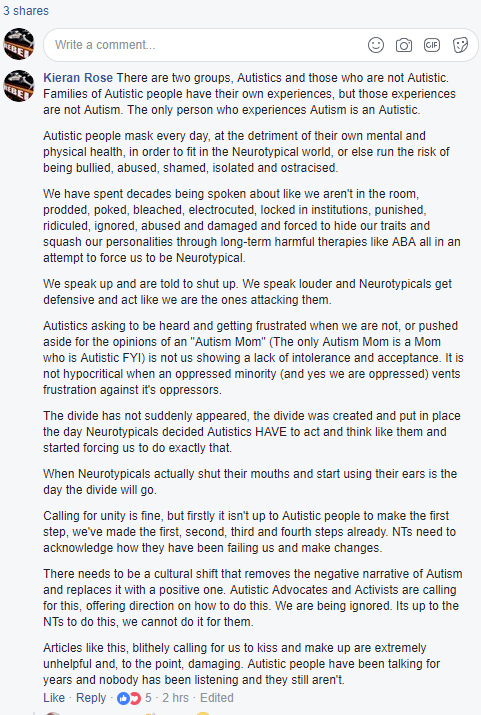 It’s got a few more likes since then.

Why is this kind of article dangerous?  Well, there has been much talk of #AutisticSilencers amongst the community, pointing out people or organisations that do not let us speak, or only let us speak if we speak from an Uncle Tom/Stockholm Syndrome viewpoint.  As highlighted by the links at the top, The Mighty is one of those organisations.

Messages like this are victim blaming, shifting the responsibility onto us as Autistics to do the running, do the hard work, so the NTs can safely wallow in THEIR society expecting us to change for them. Again.

This won’t happen on my watch.  Society must take responsibility for its refusal to allow Acceptance for Autistic people.  If parents of Autistic children want an Autistic arm linked into their to go skipping with, then they need to close their mouths and open their ears.

I welcome discussion with parents, I met for the first time and had a lovely talk with Jodie Eaton, from Autism with Love, just yesterday.  We talked about our children, Autistic or otherwise and got on very well.  Where’s the divide?  It’s not there, because Jodie wanted to listen, she took advice from Autistic people and hey, guess what?  It worked.

If you’re the parent of an Autistic child and you’re reading this.  Ask yourself this:  If you aren’t listening, why not?  What are you afraid of?  One day, your Autistic child is going to grow into us and i bet they’d be pretty pissed to find out that you had the opportunity to learn from Autistic people and refused to so they could go to ABA sessions instead…

Autistic people are not throwing their toys out of the pram, we are not being obstinate and throwing hate and vitriol at Neurotypicals as a kind of punishment.  We bloody should be!  But we aren’t.  We are asking that you listen, that you stop excluding us, that you stop ignoring us.

If you start doing that, maybe you’ll find that divide getting smaller.