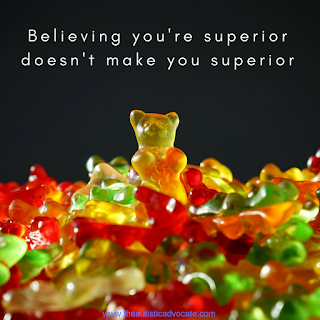 Humanity has overcome the food chain, and having surpassed all other predators, has now turned to a strange form of cannibalism: humanity preys upon itself. We cull our own herd. We murder our own children. This is what we call “progress”

– A.E. Samaan
**Content Warning: Eugenics, Supremacy, Genocide, Nazism**
In my article:”Functioning Labels: Why you shouldn’t be using them (thanks a bunch Terminology Dudes)” I talk about how the use of Functioning Labels and the sense of hierarchy that has developed from them.  So in this article in going to talk about how that hierarchy has been dangerously and harmfully applied in some cases.
I have to warn you, in order to prevent this article from becoming unavoidably terminology heavy, simply due to the weight of history behind it, I’ve assumed that a lot of the terminology is known.  I’ve linked to Wiki pages for every term I’ve mentioned, so you can have an understanding of everything.  I will also be writing an article at some point in the future on Eugenics, Nazism and Supremacy and how it applies to Autistics.
There is a model of Eugenics and Supremacy that has, absolutely bizarrely been adopted by Autistic people.  Yes, the exact same people that have been persecuted, hospitalised, experimented upon for as long as Autism has been in existence, have now turned on themselves.

The coming together of the Autistic Community has led to calls for the Low Functioning and High Functioning labels to be removed, mainly due to their arbitrary, Ableist and non-representative nature.  These calls have come at a price though, as some Autistics, particularly those with a diagnosis of Asperger’s Syndrome, feel that because of their perceived higher intellect, they do not wish to be associated with those deemed Low Functioning.

They feel that their ability to function in society better than their brethren, despite the fact that they also spend most of the day masking their sensory overload and stims, means that they are somehow better than them.  They have no concept that Functioning Labels are irrelevant and don’t even apply to them.

This group has been named by the wider Autistic community as either Autistic Supremacists, or Aspie Supremacists.  I prefer, and have coined the term: Autzis.

There have been calls from these Autzis for cures for Low Functioning Autistics.  Many of them also support the actions of Autism Speaks (Article impending) and actively spend time arguing semantics and moving goalposts in ‘debates’ with Autistics who dare to criticise anything related to Neurotypicals.  You can often find Autzis teaming up with Curists and A$ apologists.

It really is worrying how blinkered they are and how blind to the fact that Autistic Advocacy only seeks parity and acceptance from Neurotypicals, not to rise up and take over.  They truly feed into this X-Men type divide, whereby Autistics are the Mutants, with their followers the X Men and Autistic Advocates marching round like Magneto, trying to take over the world.  Yes there are times in Groups that are all or predominantly Autistic that people joke about these things as a way of venting frustrations, in the same that NTs vent about their frustrations with us (Except often that’s done publicly and yes, i have seen the insides of ‘Partner’s of Autistic people’ Groups and seen the utter bitter hatred some people have for their Autistic other halves).

The fact that they have a name (and an Identity) shows how large the problem is growing and even more worrying are the parallels between their rise and the rise of the Far Right and neo-Fascists across the world.  For the average person this is a new thing, for someone like myself, as an Activist and opponent, this is not new at all.  Things like Brexit and the ascension of Donald Trump, along with Erdogan’s grip tightening on Turkey and the success of Far Right parties in France, Austria and Germany, seem to have opened the door for a public reappearance of our old friend, the Fascist.  They’ve been there all along, lurking in the shadows and the underground, but now feel emboldened.  They are public.  Very public.

The parallels between a Eugenic Neurotypical ideology and Autzi ideology are scary, yet also confusing.  It’s like every Autzi has no idea that by enabling the Neurotypical Supremacist into power, they are literally walking open-eyed into an Autistic genocide.  If the aim of a Supremacist is to get rid of what stops his race from becoming pure, why would they keep a bunch of Autistics around, once they’ve served their usefulness?

So the biggest question for you, as an Autistic Ally, is how do you spot an Autzi?

This lovely breed of Autistic tends to be White and CisHet (Heterosexual) and can be found using the following descriptor:

They usually claim to be Anarcho-Capitalist, Libertarian Right (The only form of Libertarianism according to them) or (If British) true Conservatives.  They’ll never, ever admit to being Far Right despite the fact that they’ll have Fascist imagery all over their social media pages.  The majority tend to live at home with their parents and not leave the house, (Again they’ll avoid letting you know this), yet claim to know all the answers and be worldly wise.

Oh and they are usually internet trolls.

This is a summing up of their Ideology:

a) They believe they are superior to other Autistics, especially those deemed ‘Low Functioning’
b) Wish to keep Asperger’s as a seperate identity to Autism because of a)
c) Consider themselves superior to Neurotypicals
d) Hold white nationalist views that feed into a) and c)
e) Often Christian (or think they but don’t really understand Christianity)

f) Sometimes consider themselves as better/more important than Neurotypicals

g) A combination of some or all of the above
I guess the only biggest thing that they have in common with the average Autistic is what separates them from the NT Supremacists they love and support; that the Autzis will be genocided by the NT Supremacists too, if they ever get power, probably after they’ve been made to work as Camp Guards, slaughtering the rest of us.

« Previous Post Functioning Labels: Why you shouldn’t be using them (thanks a bunch, Terminology Dudes) Next Post » I do not HAVE Autism