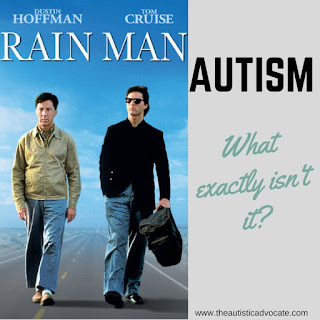 In my article entitled ‘So… Autism, what exactly is it‘ I talked about just that, but what I didn’t talk about, was what an uninformed person might think Autism is.  So I’m going to go over some commonly held beliefs and myths and debunk them… Coz they ain’t true!
Exceptionally naughty
Autistic behaviour isn’t bad behaviour.
An Autistic person (young or old) having a Meltdown is NOT behaving badly, in the same way as a child with no legs is not refusing to walk.
A meltdown can present in many ways, but the most commonly held view of a Meltdown is that it looks like an enormous tantrum.  I don’t know if anyone has researched the commonalities of types of meltdowns, but i imagine it is the most common type.  I can understand why, to the untrained eye, it can look like a huge tantrum.  A meltdown can present with being red in the face, sweaty, screaming, shouting, lying on the floor thrashing, wailing, hitting objects, hitting themselves, biting themselves, threats to other people and of self-harm, aggressive behaviour, swearing and blindly fleeing and much more.  This can be the same in both adults and children.
A meltdown should never be compared to a tantrum.  A tantrum serves a purpose (and yes Autistics are capable of them), but a meltdown is uncontrollable.
Bad behaviour can cover a multitude of things.  Of course Autistics are capable of bad behaviour, but often, what can from the outside appear as bad behaviour (Running away, not paying attention, not listening, doing the opposite of what’s been asked, only doing half a task etc), can actually be attributed to Autism, either through Sensory Overwhelm, Auditory Processing Delay, Executive Dysfunction, routine control etc. So before reacting to an apparently disobedient/naughty child/adult, perhaps take a minute to process the context of why, not just the what.
And ignore old Agnes from number 37 who comments “They didn’t have this Autism thingy in my day!”
They did, old lady, except you didn’t talk about it and locked them into mental Institutions…
Able to look you in the eye
If i had a penny for ever time I’d been forced to make eye contact with somebody, I’d be a millionaire by now.  Eye contact is painful for us.  It’s really hard to describe why, for me the explanation that I’m exposing myself to someone fully, kind of feels comfortable but i don’t think its the only reason.  Regardless, like i said, it’s painful to us.  Not making eye contact doesn’t mean I’m not listening, if you’re worried that I’m not, ask me to repeat what you’ve just said (Give me a second though, as i made not of had time to process what you said).
I’m Autistic though and an expert at Masking.  To make you feel comfortable, if i have to look at your face, I’ll make regular eye contact with your eyebrows, the bridge of your nose, your eyelids, I’ll focus on your tear ducts, even that spot underneath your left eyebrow.
Anywhere but your soul piercing eyeballs…
Shy
Autism isn’t shyness, nor is it even extreme shyness.
According to Google:

Shyness is the feeling of apprehension, lack of comfort, or awkwardness especially when a person is around other people. This commonly occurs in new situations or with unfamiliar people.