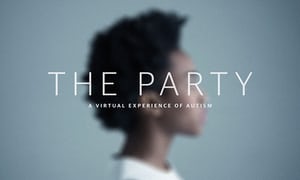 I stumbled upon this article in the Guardian today.

It showcases a VR video created to help generate publicity for undiagnosed Autistic women and also to show people (Neurotypical people, I assume), what it can feel like to be inside an Autistic mind. The video follows a surprise birthday party through the eyes and ears of Layla, an Autistic teenager (or so we’re told, we never actually see her) and shows us how she struggles with the sights and sounds, the anxiety of having to converse with a variety of different people, the lack of understanding of how the situation is making her feel and the ignorant dismissal of Autism.  Most importantly it shows how all of this is happening inside Layla’s head.  She’s masking and it takes someone with understanding to recognise that she is unable to cope with the situation at all.

Have a watch of the video and see what you think.

It’s probably worth watching on a phone or tablet so you can move around and get the full effect. If you want to watch via a VR headset then you can download the App from the Apple App Store or the Google Play Store.

According to the article:

“The Party is based on a concept by the author Lucy Hawking and is written by Sumita Majumdar, who drew on her own experiences as a person with autism in similar social situations. Throughout the film, viewers hear Layla’s thoughts, voiced by the autistic teenager Honey Jones. The storyline was developed after extensive focus groups and interviews with people on the autism spectrum as well as with input from the National Autistic Society, the Autism Research Trust and the University of Cambridge Autism Research Centre.”

It’s great to see Autistic people, specifically Autistic women, involved in the process of creating this film and hopefully it will generate much interest and publicity. The ratio of diagnosis between men and women is ridiculously tipped in favour of men, which means there are a lot of undiagnosed women and girls out there, currently struggling with conformity and superbly masking their way through Neurotypical society.

I have issues with the National Autistic Society and the damage still being caused by Simon Baron-Cohen’s ‘Theory of Mind’, that I will go into that in separate blog posts, but it feels to me that they’ve involved themselves in good work here.

Obviously the film can in no way get across exactly what it’s like to be inside an Autistic mind and also can’t encapsulate the fact that all Autistic people have differences in how they would interpret and react in this particular scenario, but it gives excellent grounding for a Neurotypical person who has no basis for a starting point in how to empathise with an Autistic person.

There are someone beautiful and heart-wrenching quotes at the end of the film, given in text and as a voice over, from women giving small descriptions as to what the inside of the brain is like during social settings and really showing how Autistic women are capable of Masking so well. If you wish to skip ahead to this section, the time stamp is: 00.06.09

“I practice conversations, what they might say to me, or how to introduce myself, or how if they introduced myself, what I’d say”

“I consider facial expressions before I make them, because a lot of it is practising being Neurotypical“

“When I’m anxious my brain flashes things at me…”

There are many more and many of them hit home with me, not only because they are so well described and poignant, but because they expressed how I feel in those situations.  Especially the tube train.  I often feel that a part of my brain and the world is rushing past, literally to the point where things are blurred and I can’t focus (similar to the blurring shown in the film) and that my body and a part of my consciousness is moving in slow motion. The video kind of showcases a little for me (and in no way to steal the limelight from Autistic women) my own theory, which is shared by quite a few other Autistics, like myself, who present with Female-type Autistic traits.

The only real problematic point in the film that i could think of was that the Dad had no understanding of his Daughter’s issues, to the point where he removes her headphones.  That just felt kind of abusive.

I get a little tired of the generalisation of Father’s roles in the lives of their Autistic children.  There are many of us, that not only involve ourselves fully in our children, but are their primary care givers and I would like to see that noted a little more often.

The only other problematic point may be, that the video coincides with The Guardian’s giveaway of 20,000 free cardboard Virtual Reality headsets.  So it makes me consider how altruistic they are being by showcasing this, smack bang in the middle of the National Autistic Society’s Autism week.